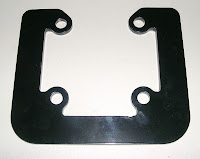 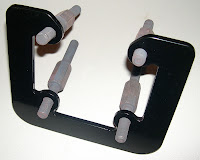 
While we were out to the Dave Antram's Gravely Swap Meet in September, '09 we were asked if we could solve a problem with the studs of the quick hitch. The "Gravely" design allowed one or more of the studs to bend under the forces developed by the attachment, such as a snow blower, that would rest against the tilt limit bushing on the stud. "Gravely's" solution to this problem was to put a plate across two studs after you slid the attachment (such as the snow blower) on the horn. This took away from the "quick hitch" concept because you had to unbolt the plate before you could remove the attachment again. Our mission was to design a plate to bridge across two or more of the studs behind the attachment, thus reinforcing the studs enough to curtail the bending problem and keeping the "quick hitch concept. We believe we have met the challenge with this superb offering.


Description for the Gravely Quick Hitch 4 Stud Reinforcement Retainer Plate
This 1/4" thick plate doesn't sit on top of the quick hitch casting. Its shape goes around it sitting back in the stud pockets. With the standard hex studs, the plate would extend beyond the casting surface between 1/8" & 3/16". In most cases, this will clear the attachment. In some cases it will not. If not, we offer an optional modified hex stud ( with a shorter hex portion) to allow the plate surface to fall behind the casting surface.

The plate has received black Powder Coat Paint for a durable finish.

This plate will fit in either of the adapter boxes for shipment if purchased together.

Thank you for your consideration.

Please offer your thought about what you see in our world. We would also appreciate any suggestions of other needed products for us to consider for manufacture. Thank you for visiting our world.

Thank you for your understanding. Our new shopping cart is now in place and offers a more accurate calculation of shipping cost with multiple carrier choices. I had to plug in a lot of information about each product, but the results are worth it. This shopping cart still uses PayPal for a payment choice. For those of you who may have tried the previous version, I think you will be pleased with this improvement.